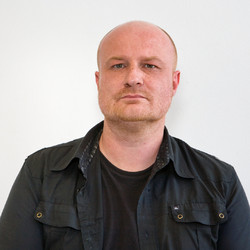 Guy (Oudenaarde, 1973) studied Applied Sciences option physics at the Ghent University (1996). Between 1996 and 2000, he performed doctoral research on medical imaging (MRI) (University Hospital Ghent). From 2000 to 2003, he worked for the VRT (Flemish Radio and Television network) for research on multimedia and digital video compression.